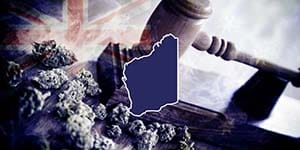 Cannabis laws in Australia are a mixed bag, to say the least. While the days of the heavy-handed ‘War on Drugs’ are (mostly) behind us, we are all still faced with navigating a society that stigmatises and punishes weed users in myriad ways.

Also: since we live in a federation, we can’t even count on a bit of consistency to make it easy on our bud-soaked brains. Every state has different laws, requiring their own unique strategies.

This series will address the key legislation and policies you’ll need to know about as a resident stoner in Australia. We’ll be focusing on recreational smoking and growing for personal use — if you’re a dealer and you get busted, that’s on you.

While WA is certainly stricter than most other states, there are a handful of strategies in place to protect first-time and/or younger users from prosecution. The most important of these is the CIR, or ‘Cannabis Intervention Requirement’. The following information is a summary taken from the WA Mental Health Commission website.

For a CIR to be implemented, you must be:

Once given a CIR:

While the CIR can be inconvenient and irritating, it’s a necessary evil to avoid prosecution and criminal convictions. If given one, follow the information above. Also, make sure you do it properly and on time.

For anything over 10 grams, you’ll almost certainly be facing criminal charges in WA. The same goes for cultivating a small number of plants. Any less than 20 is considered to be for personal use and carries the same maximum penalty, which in 2019 is up to a $2000 fine (or 2 years imprisonment). Simple possession is handled in the magistrates court.

Once you push past the 100 gram mark, there’s really no denying your intention to sell. You can argue the point in court, but it’s extremely difficult to prove. Offences in this range can be tried summarily by a judge for a maximum $5000 fine or 4 years imprisonment. A more serious charge or eager prosecutor can result in indictment, which carries a hefty maximum $100,000 fine and 25 years imprisonment (see s 6(1) Misuse of Drugs Act 1981). Supply offences are tried before a judge and jury in the District Court, and can be escalated to the WA Supreme Court.

So what do these minimums and maximums actually translate to? Maybe taking a look at the Office of the Director of Public Prosecutions can shed some light on what sentences are actually being handed down.

Police found a hydroponic setup in a shed alongside $2100 cash and digital scales. Convicted with intent to sell or supply 6 plants, 18 seedlings, and over 3 kg of plant material.

Police intercepted a package containing 1.3 kg of cannabis. They replaced it with an inert substance and arrested Savory retrieving the package at his PO box. Convicted with intent to sell or supply.

Found with 900 grams of cannabis, $10,500 cash, scales and clip-seal bags. Telephone intercepts revealed an intent to sell. Convicted with intent to sell or supply.

A little research on WA cannabis sentencing suggests a strong emphasis on the mitigating factors of a case. It was difficult to isolate cases that exclusively focused on cannabis. Personal possession is far less likely to attract a conviction or a hefty sentence than intent to sell or supply, and many cases are complicated by the presence of other substances.

On the point of possession

Possession can be a hairy legal issue in WA, and there are a number of points worth knowing about if you find yourself in trouble:

This is by no means a comprehensive list of WA cannabis law. We’ve summarised the most relevant points for recreational users and growers here, but it’s well worth researching the specifics if your bud habits aren’t covered here. Similarly, if you’re a legal guru and there’s something important we’ve missed, please let us know in the comments or via email.

[…] Law Cheat Sheet with New South Wales. In the meantime, be sure to check out our articles on WA, SA, and […]

[…] Last time, we covered the essential bud-law you need to know for getting stoned in WA. […]

I’m prescribed cannabis for rheumatoid arthritis, how am I meant to dose when the implemants are illegal?????

Last edited 1 month ago by Mark SOMMERVILLE
Recommended For You
What's Causing the Great Aussie 'Dry Spell' of 2020?
Reply

If you’ve been prescribed under the legal medicinal cannabis scheme, you will likely not face a conviction for possessing any paraphernalia.

What Makes Cannabutter 'Magical'? It's difficult to locate the source of cannabutter's magic - but let's just say, the cannabinoids certainly...
Read more