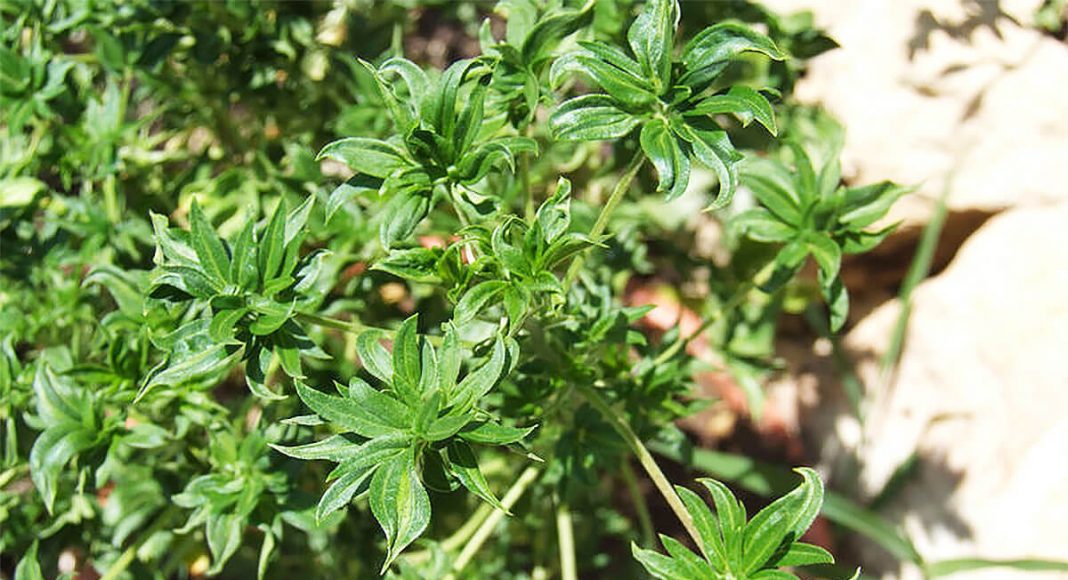 It’s an ultra-stealthy, scarcely known variety of Cannabis, growing all around Australia. You could be growing marijuana in your backyard and not even know it!

Australian Bastard Cannabis (ABC), also known as Cannabis Australis*, is a unique variety of cannabis specific to Australia. It possesses structural and growth characteristics distinctive from any other known variants of cannabis. Indeed, these qualities actually mitigate some of the risks associated with growing cannabis.

There is little formal scientific information about ABC. Most of the information out there emerges from the accounts of growers, along with the hearsay on grower forums.

Self-proclaimed cannabis research breeder and Oz-Stoner Moderator MongyMan claims the ABC variety was first discovered by a couple he knew. After finding ‘mutated hemp’ ‘not far from Sydney’, they began breeding it over the course of several years.

ABC’s leaves resemble garden herbs, forming a plant with a bush-like appearance. This makes ABC more or less inconspicuous amongst normal weeds. MongyMan explains that he distributed many seeds, only stopping when people attempted to sell his variation of the plant, known as ‘Mongy Madness’, on the streets.

At least as far back as 1970, ‘mongy weed’ has been posed by members of the Australian grassroots cannabis culture as a possible alternative to growing the more conspicuous cannabis varieties we are familiar with today. So, where did this variety originate?

Dr John Jiggens, a cannabis writer based in Brisbane, suggests that ABC was imported by Sir Joseph Banks for what is known as the New South Wales hemp trials. It is likely that Variants of Cannabis Sativa were brought across from England following failed trials of the highly psychoactive Cannabis Indica in India. This was to test the feasibility of cannabis as a versatile industrial crop in Australia, a country described initially as barely arable by its settlers.

John Rainford, author of Consuming Pleasures: Australia and the International Drug Business, opines that some seeds came into Australia with Arabian camel herders who occupied South-Central Australia in the mid 1800’s, inadvertently giving rise to the largest feral camel population in the world.

Another narrative posited by Dr John McPartland, a cannabis researcher suggests that William Roxburgh, a British botanist from Calcutta sent Cannabis germplasm (a fancy name for plant genetic material) to Australia in 1802 and again in 1803. Jiggens and McPartland maintain that this gave rise to the infamous Hunter Valley Cannabis outbreak of 1963, wherein some 30 square kilometres of Cannabis Sativa grew in unbridled profusion. Over the following years, the Department of Agriculture and Fisheries, in tandem with the NSW Police, completely eradicated the so-called ‘devils’ lettuce’ with the deployment of several carcinogenic herbicides throughout the valley.

Whilst often confused, this outbreak involved typical sativa plants; as opposed to ABC, which has an atypical appearance. At some stage, and by an unknown mechanism, it is possible that ABC had evolved from one of these myriad possible sources of imported cannabis.

There is also evidence that this strain is actually an ancient Australian landrace, genetically isolated when Australia became a separate landmass. A proponent of this claim is MongyMan, who cites a ‘dated’ genetic study as evidence for this claim. Medical Genomics’ analytics on ABC vaguely suggest that it is genetically disparate from modern strains. This suggestion contravenes the position held by many other forum users – that ABC evolved from Cannabis Sativa, introduced in the early colonial years.

A final, currently unverifiable claim is that ABC is a mutation of an illegal grow-gone-wrong. This seems unlikely, given the apparently vast distribution of this plant. In support of this are the varied and confused accounts of this plant, some of which seem to be discussing a completely separate plant. In all, more genetic evidence must be obtained to pin down the exact origins of ABC.

So how did ABC get its unique physical attributes? The plant barely resembles the common cannabis varieties, with one exception, a pure sativa variety known as ‘Dr Grinspoon’. This strain is bred by Barney’s Farm in Amsterdam, and bears a resemblance to ABC, in both general characteristics and flavour profile.

With all of the background information out of the way, what exactly is ABC?

ABC’s most notable features are its oddly shaped leaves resembling hops (Humulus Lupulus), a close relative of Cannabis. It has an unremarkable THC content, at around 5%. Analytics conducted on a hybrid (of a THCA+) plant by Medicinal Genomics showed relatively high level of terpenes Myrcene, Limonene and surprisingly high levels of Terpinolene. It’s flavour profile is described as peppery and reminiscent of a strong Sativa, with a strong lime aroma and earthy accents. 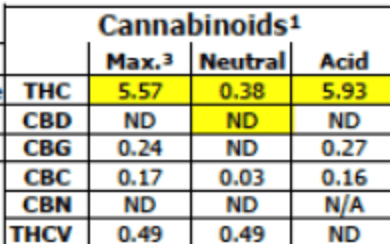 Nevertheless, you’ll be quick to point out that a 5% THC content is laughable compared to today’s high potency strains; however, remember that the strains we enjoy today have been selectively and scientifically bred to exhibit such traits over many generations.

However, these results are complicated somewhat by the suggestion that they were taken from immature flowers. There are several independent forum posts which claim that ABC is best served by an extended flowering period (over ten weeks by some accounts) that allegedly increases potency significantly. Hybritech, a breeder based in Oregon claims to have selectively bred ABC over almost 20 years and posits that ABC has a potency of around 12%. It is wise, however, to bear in mind that information from breeders regarding ABC has real commercial ramifications, and therefore must be viewed as such.

At present, there is a severe lack of reliable scientific knowledge on ABC. This can be attributed to the limited access to the plant, given only a few reported sightings in the wild. This is worsened by our current anti-drug legislation.

Additionally, the genes determining leaf structure and plant size are recessive. This means they often do not appear in the offspring of crossbred ABC plants.

A notable example was the crossbreeding of ABC and the popular (at that time) hybrid strain ‘Flo’. Unfortunately, most offspring bore no resemblance to the original ABC. This cross-breed was distributed by Cannabis Culture magazine in June of 1999, with varied but mostly disappointing results. Most individuals had low relative THC levels, and looked like a regular cannabis plant. However, it was reported that a few of the first- and second-generation offspring looked like regular Flo, but inherited the hardy, frost resistant qualities of the ABC.

An even smaller number had retained the coveted outward physical appearance of the original ABC. Suffice to say, the cost-benefit nexus afforded by this new but apparently ‘dud’ cannabis variety saw it transgress into further obsolescence, with higher potency strains taking precedence.

The future of ABC

The cannabis culture at the time meant that plants with the highest potency and yield reigned supreme. Today, however, our outlook on cannabis has broadened, making this strain relevant once more. As countries across the world explore the idiosyncrasies of legalising and industrialising a plethora of cannabis varieties, ABC may hold promise as a genetic gem. One possible use case for ABC crossbreeds is that they offer freedom from intensive farming methods. These modern methods are currently inseparable from contemporary cannabis farming, whereby hardy, weather-resistant crossbreeds can be grown in otherwise unsuitable regions and conditions. Interest is rising in ABC from growers both at home and abroad, hailing from Asia, Europe and North America. These prospective growers promise cash rewards for anyone with original seed stock of ABC.

One common misconception which permeates most forums and discussion boards is the conflation of ABC with a variety known as ‘Duckfoot’ – a cannabis strain with webbed leaves. This strain was specifically bred to produce foliage bearing little resemblance with common cannabis. Otherwise, it has no relationship to ABC.

Whatever the future of this unusual cannabis variety holds, be sure to keep your ear to the ground and your eyes to the bush, as we uncover more about this intriguing homegrown genetic gem.

If you have any information about ABC, Friendly Aussie Buds would like to know! Contact us at contact@friendlyaussiebuds.com or use our contact form! We are looking for as much information about this amazing plant!

*Cannabis Australis was a name given to ABC by its growers and is yet to be a scientifically accepted name.

EDIT: We have become aware of the original source of some of the pictures featured in this article and have adjusted accordingly.

Writer and University Student Based In Sydney

Matt
Writer and University Student Based In Sydney

It was really cool reading about this. Pretty interesting how Australia has it’s own form of cannabis. Thanks for sharing!

Seeds are available at humboldtcsi

We’d love to have a chat with you! Reach out to us on our socials!

I move for the scientific community to recognize Cannabis Australis as the name for ABC. Great read and it’s cool to know that Australia has its own strain.

Another story has it that the Afghan cameleers introduced ABC in the 1860’s, along with date palms, up and down the Oodnadatta Track when putting in the Overland Telegraph Line. It may therefore be a mutant of Ruderalis, a hardy Central Asian variety, well able to cope with extreme conditions of heat and cold. It’s reputed to be beneficial for depression. Does anybody know any more about it’s healing capabilities? Also where Australian grown seeds can be obtained? Currently the USA seems to be the main supplier. That doesn’t seem right somehow!

I’m getting ready to put ABC into flower in a couple weeks. I’m just waiting on the Ducksfoot to show sex. Once of the coolest runs I’ve done so far!

Our USA seedbank stocks a strain thats crossed with ABC

Im in Aus and got my eyes wide open atm ,should be poppin up soon in the bush.

I am in Central West NSW looking everywhere for some wild growing!! Any tips appreciated

Great article! It’s the best and most comprehensive source on this unique sub species of cannabis I have found. I grew out a plant of Australis for the first time in 2020 and it is one of my favorite strains to grow and smoke! I got the seed from CSI Humboldt (site 4) and like your article states it looks much like the Dr.Grinspoon strain compared to other varieties I’ve seen. One of the most unique and special cannabis plants my self and many other experienced growers in Northern California have ever smelt with an overwhelming Jasmine, Gardenia and Rose… Read more »

Writer and University Student Based In Sydney

Cannabinoids: The Compounds Behind Cannabis

How Terpenes and Flavonoids Contribute to the Taste and Smell of...