WHO KNEW? The Humble Herb Grinder is Actually an Australian Citizen!

Friendly Aussie Buds has a fun fact for you folks! Did you know that what would become the iconic cannabis grinder was first invented and patented by a pair of Australians?

In 1905, two Aussie residents were awarded the first US patent for what we now recognise as the humble “herb grinder”.

This invention is attributed to William Wingfield and John Balding of Boort, Victoria, Australia. They patented their novel herbal grinder in 1905, at the turn of the 20th Century. This product was designed for mass-production during the midst of the second industrial revolution, where factory assembly lines had transformed the production process. Just as our fledgling nation was coming into being… the grinder was innovated into existence!

So, you see… the cannabis grinder is as true-blue as you and me! 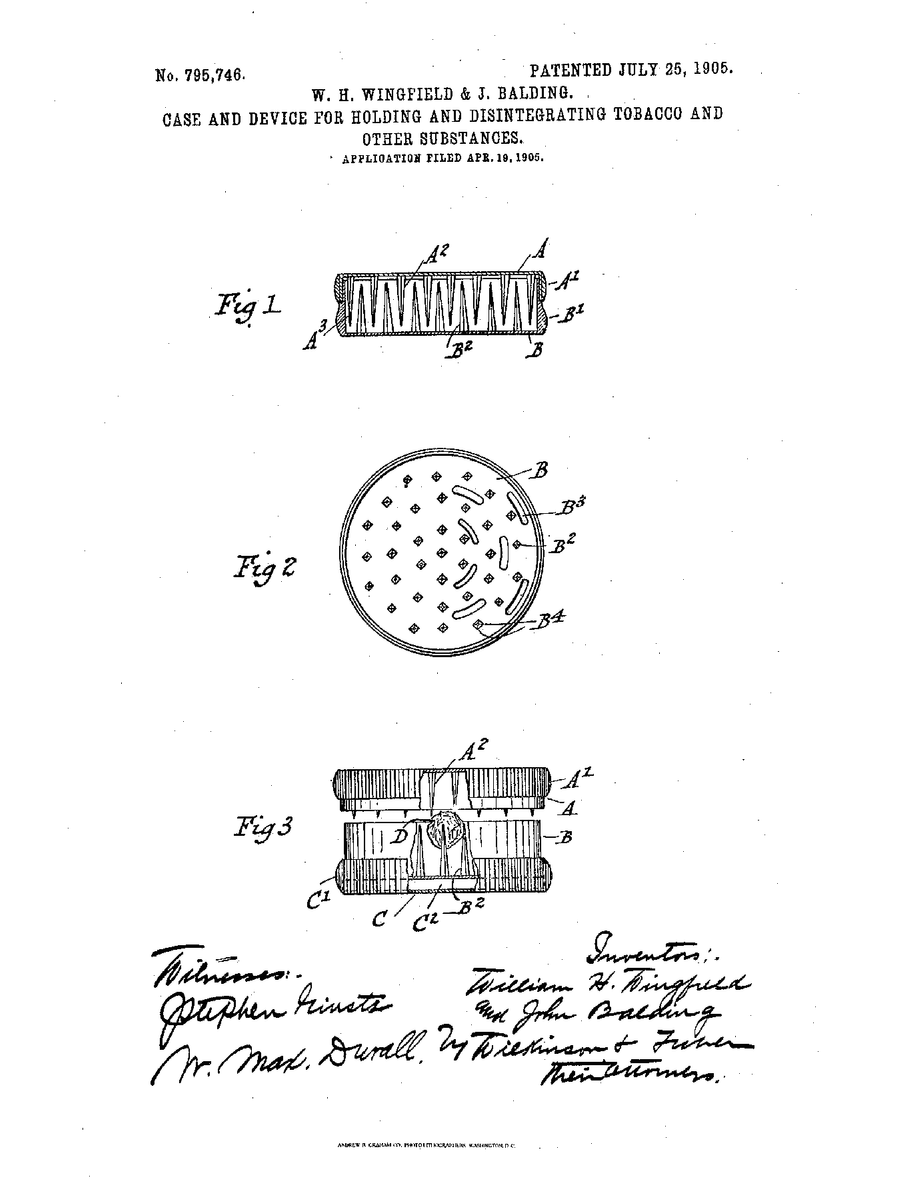 To be fair, these Australian men likely did not have the specific intention of using this product for cannabis… instead, this was a herb grinder for grinding medicinal plants, tobacco, and other various herbs.

The invention was designed to be used primarily by tobacco smokers; specifically “to enable plug-tobacco to be disintegrated for pipe-smoking, without the use of a common knife.”

With that said, we can reliably trace the lineage of the modern cannabis grinder back to this very patent. Even if our two Aussie heroes never intended their patent to be used in this way… they’re still responsible for creating the reality we live in today, where we can crush our weed with ease. What legends!

The History of the Humble Herb Grinder 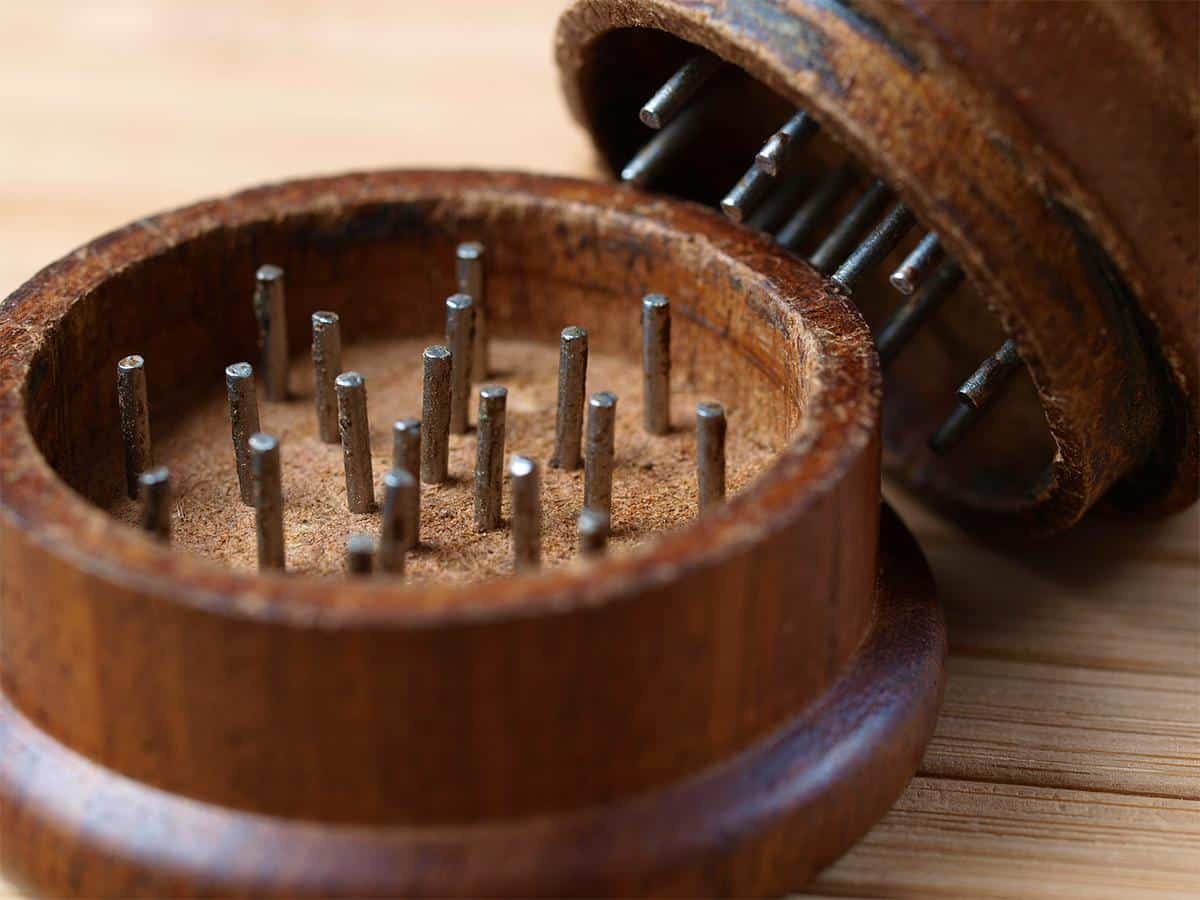 We don’t really know where the first herb grinder in history emerged from – all we have to go from is this patent for a manually-operated stainless-steel herb grinder with teeth, lodged back in 1905…

Even so, the invention very closely resembles the contemporary hand grinder – we can assume that this invention has sparked a wave of products influenced by its basic concept.

For good reason, too – although significant adjustments have been made in countless products over the years to optimise the grinder and provide it with certain intended effects, the original design has remained a mainstay due to its broader reliability and effectiveness.

It’s popular for a reason – it just works!

Wait… So, What Did People Use Before Grinders? Believe it or not, prior to the invention of the herb grinder in the early 21st century, people relied on other methods that were ultimately less effective and time efficient. They either used a mortar and pestle, ground the material between rocks, or shredded their ‘herbs’ by hand.

The invention of the herb grinder changed the game forever. The gadget spread across the globe on the back of an expanding world economy.

Suddenly, instead of rubbing plugs of tobacco between their hands, or chopping them up with kitchen knives, smokers could easily grind and store material for later use.

People also took to grinders to perform the increasingly underground and ‘stigmatised’ act of smoking cannabis… with ever more convenience, speed and efficiency.

The classic grinder design hasn’t changed much in the 102 years, since. The vast majority—including leading brands like Santa Cruz Shredder and Space Case—look pretty much like what’s depicted in Patent #795,746.

Although, somewhere along the line, manufacturers switched from a wooden body – deciding on aluminium as the material of choice for mass-produced grinders. Okay, well that’s all well and fine… but what if you want to support Aussie businesses in the present day?

If you’re looking for an Aussie-designed grinder that fits your 2021 sensibilities, the GrindeROO could be the chop-up for you. We definitely recommend this product – it could well be the best grind, down under!

Visit GrindeROO.com to check out their range of grinders in stock! We love the 4-Piece OG; with at least five of them scattered across the house, and with all of them being used regularly, we became big believers in the basic, no-BS quality of the product. We have never had any major complications or issues with this grinder – much like the original, it’s an Aussie product that just works!

The Top 8 Vaporisers to Convert Even the Biggest Bong Head!