Holidaying in the Home of Moroccan Hash

“‘In August is when the hippies come. They buy one, two kilograms, they wrap it and pop! On the boat to Spain.’ Mustafa mimes, sticking a thumb into his enclosed fist.
‘Up their ass?’ I ask.
He laughs. ‘Yes. In the ass.’“

The elevation and landscape of the Moroccan Rif mountains make travel difficult, to say the least… and that’s without mentioning the narrow, poorly-maintained roads and semi-frequent landslides. 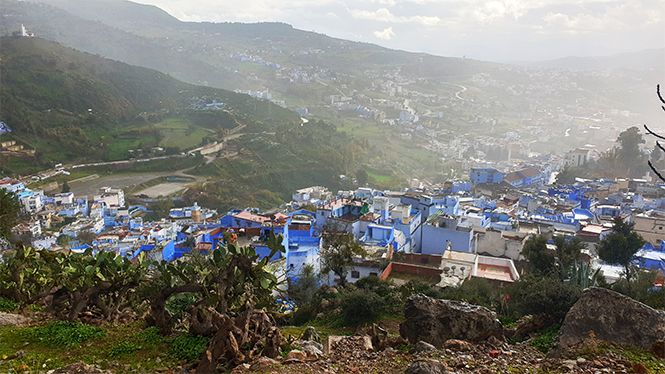 Despite the region’s inaccessibility, the fertile soil and reliable access to water (and thus, the means of life) has kept these mountains populated for millennia. It’s here, a few hours south of Tangier, that you’ll find Chefchaouen (shef-SHA-wen) – an ex-Jewish settlement, known on Instagram for its pastel blue Andalusian architecture. For smugglers and backpackers, it’s also known as the central trading hub of the Moroccan hash industry.

Generally speaking, Aussies have never had much of a taste for hash. For the uninitiated, hash is formed from the heated and hard-packed resin of cannabis kief. Hash is a longtime cultural staple across Africa and the Middle East – including Morocco.

Hash goes way back; the English term assassin is derived from the Arabic hashishin — i.e. ‘eater of hashish’. The Berber people of northern Morocco have cultivated cannabis for hash-making purposes for centuries. It was only after the Moroccan state stabilised in the mid-20th century that eager Europeans rediscovered the local growers, and started trading en-masse.

This market has persisted ever since, despite the illegal status of cannabis throughout Morocco. The monarchical government has developed an ongoing truce with the peasant farmers: don’t spread your product to city-dwelling locals, and we won’t go after you — this is obviously ignored by many. Tourists are mostly free game.

Chefchaouen is occupied by a variety of residents. Your average street corner will be populated by old-town hustlers, restaurant hawkers and exhausted locals; families, construction sites, and local markets.

The action for tourists and travellers – whether you’re chasing hash or not – is usually in ‘The Medina’. That’s where you’ll find all the streetwear-clad young male dealers, eager to flog overpriced slabs of hash on you. You can walk through the city centre for hours without hearing from them at all… but step into The Medina, and they’ll be on you in minutes. Long hair and a glazed look will expedite the process. 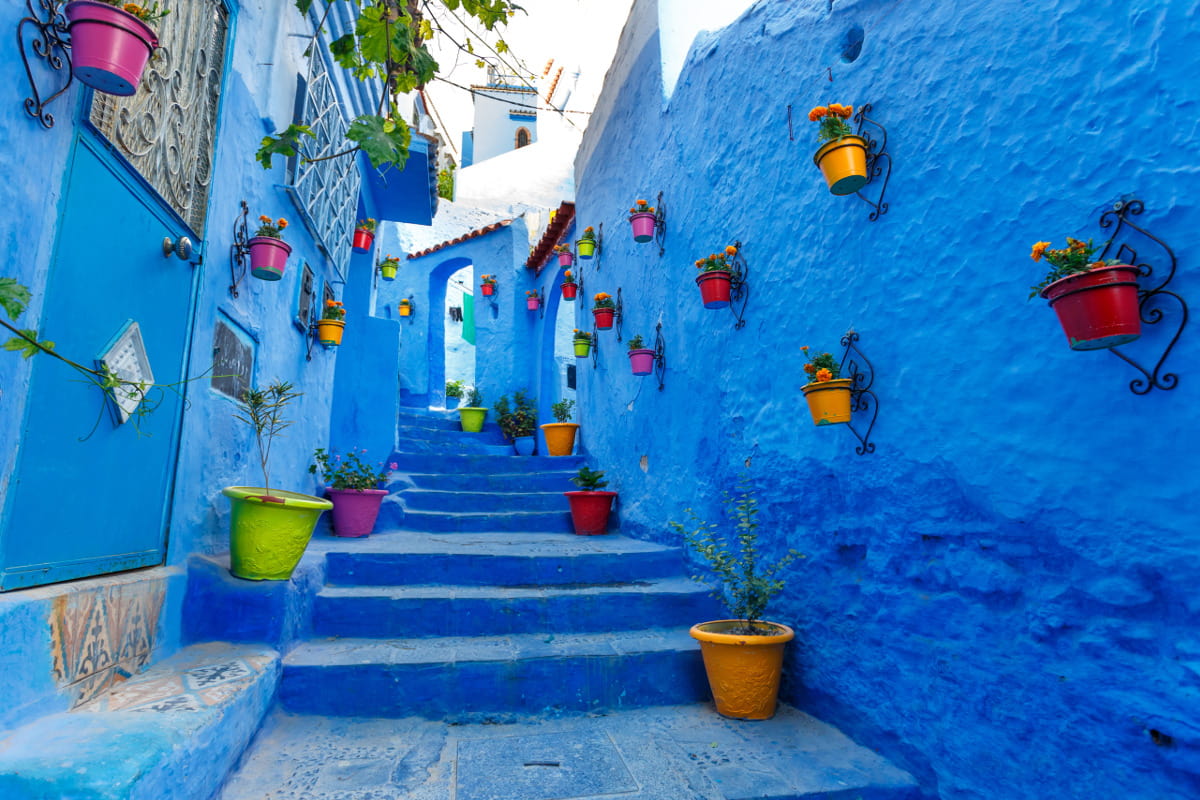 These guys never carry their product on them — in Chefchaouen, or in any Moroccan city. Smoking in the privacy of one’s home is tolerated… but getting caught dealing is a serious offence.

The process of buying begins with a raised eyebrow or a “Hello my friend. You want smoke?” before proceeding to a nearby alley. The same wannabe hustlers can be found during daylight hours, hawking tours to the hash fields. Finding someone who is actually involved in the production — as opposed to a resident that just knows where the fields are — is a matter of shopping around and using your wits.

I was lucky, in that regard. My two friends and I had made it out past the city walls, intending to walk to the fields ourselves… when we saw an old guy in a long wool coat emerge out of the forest ahead.

“Hello. Bonjour. Hola!” he said. We replied with a “hello” in unison, and kept walking.

He approached – we saw the long rosethorn pipe he held in one hand, and noticed his obvious mature age — likely north of 60. Figuring he wouldn’t be too much of a harm (we could have outrun him, if it came down to that…), we stopped. The man spoke.

“You are going to the fields, yes? I am a farmer. I will take you there.” He smiled, and started walking ahead of us. We asked the cost of the tour and got no reply. Price would be discussed later. 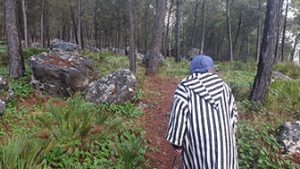 About halfway through the ninety minute walk, we had our first smoke stop. At this point, the man had introduced himself as Mustafa, a Berber man, and lifelong resident of the area. As a guide, this guy was definitely more competent than the hustlers that nagged us in ‘The Medina’. As we shared hash and tobacco from his pipe, he explained the local industry.

“We grow in the summer. Plant in five, and harvest in eight,” meaning May and August.

“Yes. In eight is when the hippies come. They buy one, two kilograms, they wrap it and pop! On the boat to Spain.” Mustafa mimes, sticking a thumb into his enclosed fist.
“Up their ass?” I ask.
He laughs. “Yes. In the ass.”
He points up the mountain to a brick building facing over the city below. “They stay there.”

The building was Casa Adil, the furthest hostel from Chefchaouen-proper, and the closest to the hash-producing village of Kalaa. From Mustafa’s account, the European smugglers stay during August and September to smoke and stare over the valley, before making their purchases, and ferrying back to Spain. It was implied that they needed time to relax and purge their lower intestine prior to jamming a kilo of Chefchaouen’s finest back there. It’s no small feat, after all. 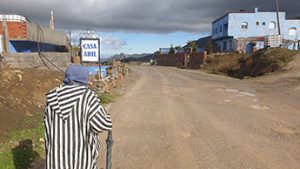 A single kilogram of wholesale hash goes for between 1000€ to 2000€, depending on level of quality and seasonal availability. Back in Europe, it’s easy enough to quadruple that investment on the black market, which tempts a large cohort of Mustafa’s so-called ‘hippie’ customers each and every year.

Mustafa was a professional of the hashish game; he spoke English, Spanish, French, and German, and had a strong desire to expand his enterprise. The level of detail in our tour made it clear: he considered us potential customers.

On reaching the village, we were shown to his home; where both of his young sons were hard at work, beating dried cannabis plants with sticks to release the kief. The kief is then heated, compressed, and packed into bricks, ready for wholesale. A proportion of the crop yield will be kept for personal consumption by the Berber men who run the operation, with the rest placed on sale for local and foreign dealers. Souls can be seen every afternoon trekking up the mountain for the evening’s product — likely getting dust and/or mud all over their fresh kicks in the process.

Mustafa was eager to explain the smoking customs of traditional Berber men. Long pipes are used most often; shared socially by groups of local men. When asked if women smoked together in the same way, he smirked.

“It is not like the big cities, here. A woman does not smoke. If she does, she will not have family. She is spoiled.”

Neither I, nor the female friend I was travelling with, felt like pursuing the topic any further. We remained quiet out of politeness. He went back to smiling, serving us tea to wash down the hash.

Altogether, we paid Mustafa about $35 each for the guide, the tea, and the few grams of hash he prepared in front of us — bringing a conclusion to the tour. It wasn’t cheap by Moroccan standards; but we didn’t begrudge the cost. A cheaper guide would have just shown us the fields and left ASAP; Mustafa let us into his home and answered every question we had for several hours.

I fully intend to return to Chefchaouen sometime… whether my asshole gets thoroughly purged next time, still remains to be seen…!