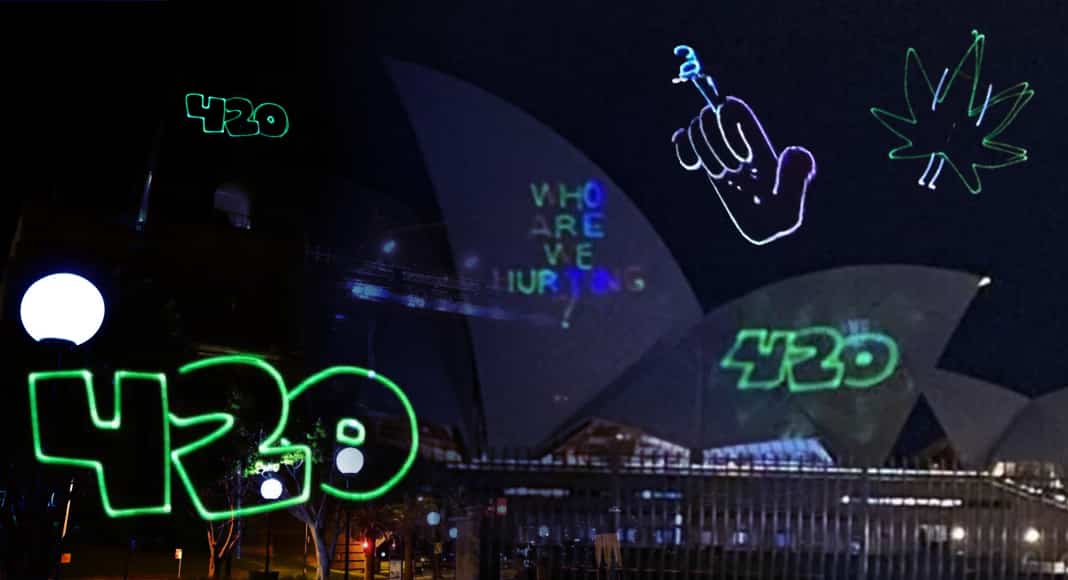 This isn’t exactly BREAKING NEWS… but seeing as it’s a big deal for the Australian cannabis community, we wanted to share this story to our readers.

The dust has begun to settle on a confrontation between the ‘Who Are We Hurting’ squad and the NSW Police that occurred on April 20th, 2022 – perhaps the most infamous and globally recognised day for celebrating the cannabis plant.

In a bold and daring move designed to draw attention to the great debate surrounding cannabis legalisation down under, an army of local artists and activists set up shop at Sydney Harbour to project themselves onto some of Australia’s most iconic landmarks. 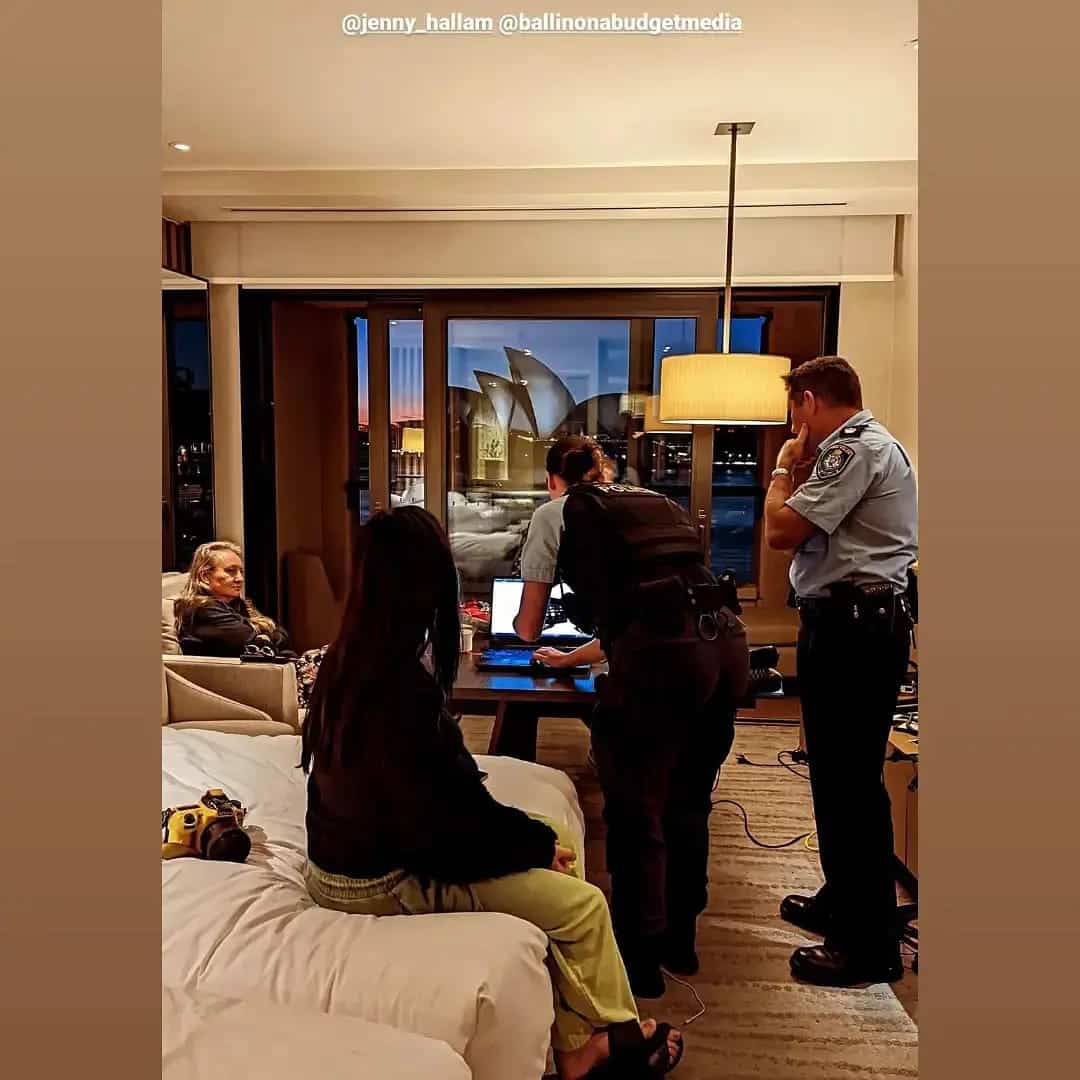 Two members of the crew were arrested by NSW Police after successfully projecting various symbols and messages onto the Harbour Bridge and Opera House simultaneously. They did this by using a device known as a ‘LaserCube‘. The two arrested members of the crew were subsequently issued court attendance notices for ‘advertising on Opera House premises’.

These symbols – including a dancing cannabis leaf, a hand holding a joint, plus the words ‘Who Are We Hurting?’ and ‘420’ – were clearly intended as an explicit message agitating for cannabis law reform across Australia. The arrested members were later released from remand after 10 hours… likely because they posed no threat to anybody. Which, it has to be said, is somewhat ironic given the message they were projecting!

No, but Seriously… Who ARE We Hurting?!

The Sydney Opera House is no stranger to controversy. In 2018, the Australian government received widespread criticism over their use of the iconic building to promote a horse racing event. At the time, Prime Minister Scott Morrison called it ‘the biggest billboard we’ve got.’

Following Scotty from marketing’s comments, The Chaser mocked the idea of advertising on the Opera House by successfully projecting ‘advertise here’ onto the Sydney landmark.

Additionally, the 2003 culture jamming efforts of David Burgess are not easily forgotten. Burgess painted the largest of the Opera House sails with bold red words reading ‘No War’. This was of course in reference to the looming Iraq war. 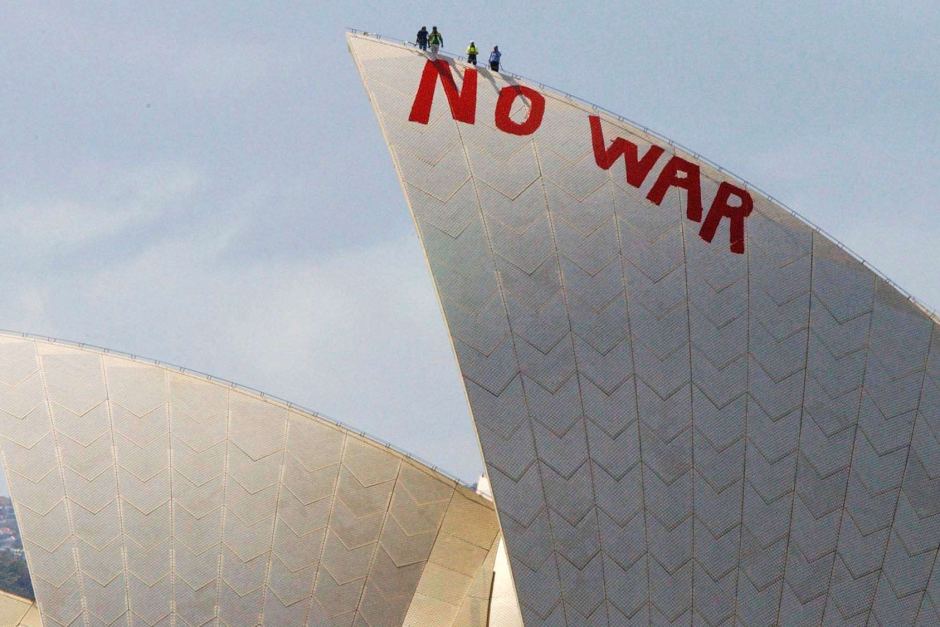 This audacious harbour-side stunt is speaking out against a different kind of war. The laser-light protest comes after an international push by activists everywhere for cannabis to be made legal for medical and recreational purposes.

In Canada and across multiple US states, laws have already been reformed in recognition of the right for individuals to make their own sovereign choices about what substances they put into their bodies. This liberty is particularly fundamental in the case of a substance as benign as cannabis.

In case you somehow weren’t aware, the cannabis plant remains extremely illegal in Australia… except in the nation’s capital, where Canberrans can possess (and grow!) up to 50 grams of dried cannabis flower.

This league of Australian anti-prohibition activists were following in the footsteps of these movements by leading the charge for legalisation across this continent. Their brave stand broadcasted a simple, pithy and increasingly relevant message across Australia’s largest city – ‘Who Are We Hurting?’. Here at FAB, we think they have an excellent point.

Recent polls indicate that over 40% of Australians are in favour of full legalisation. Unfortunately, this doesn’t change the reality of prohibition for the majority of Aussies who aren’t on the legal medicinal cannabis scheme.

Jenny Hallam addressed the media with a powerful summary of the group’s message. She said, ‘It’s time for serious law reform around cannabis. Too many innocent people are being affected by out of date laws. It’s time to end the stigma and the lies. It’s time people […] access this plant medically or recreationally without fear of persecution. It’s time for change. Because really… Who Are We Hurting?’

Another member of the group, William Stolk, added: ‘We also want to educate the Australian taxpayer on the benefits of fully legalising cannabis in Australia, and on the huge amounts of money that will flow into the coffers of the Australian government for use in health care, schools, and roads, as currently the profits are being made by private entities and organised crime.’

Sydney City Crime, the law firm representing the activists, successfully negotiated reduced bail conditions for the pair. They believe that the offence is likely to be thrown out when they face court.

We’ll be keeping our eyes peeled on this story as it moves through the courts – so stay tuned!