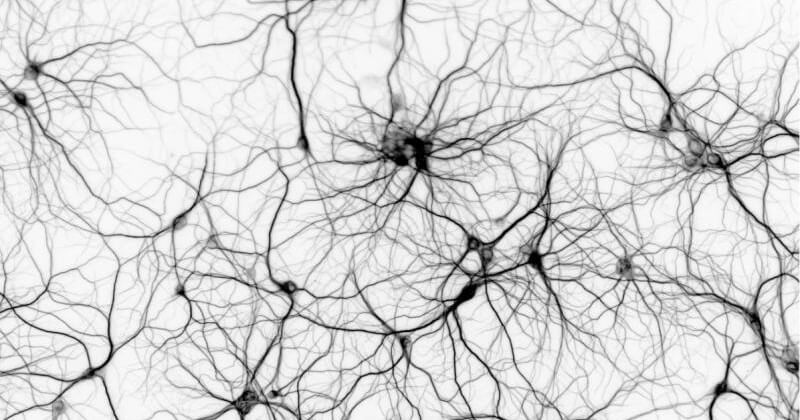 ACS: Why the Endocannabinoid System is Important

The ‘Australian Cannabis Summit‘ was held in Brisbane this year between the 5th and the 6th of July. A wide diversity of speakers from various walks of life were present… and luckily, the videos still remain online for all to enjoy, so don’t worry if you missed out!

A lot of these VODs are top notch, and we recommend you check them out for yourself in your spare time. We at Friendly Aussie Buds really appreciate what the ACS do; so, we’ve taken the liberty of searching through their videos for the most pertinent topics facing the cannabis community in Australia.

In this article, we’ll be exploring the many diverse functions of cannabinoids and deep diving into the endocannabinoid system; an endogenous network within the human body. We will be referring to the words of Dr John Teh in his presentation at the ACS. Teh is the Medical Director of Plantmed, a Medicinal Cannabis clinic located in Brisbane, Queensland.

Cannabis and the Endocannabinoid System

Cannabis has long been recognised throughout human history as a medicinal herb. Increasingly, modern scientific methods are uncovering more about the essential structure and dynamics of the plant. Rapid development in research has taken place since the THC molecule was isolated for the first time by Raphael Mechoulam. By 1992, the endocannabinoid system had been ‘discovered’ – or more accurately, acknowledged – by the medical establishment.

Okay, so what is the endocannabinoid system? Simply put, it’s an internal (i.e. ‘endo’) regulatory system which influences multiple physiological systems to maintain homeostasis. It’s effectively a system of checks and balances which help the body operate within healthy parameters.

“The ECS prevents excessive reactions by other systems in the body”

The scope of the endocannabinoid system is immense. It modulates immune function, cardiovascular function, metabolism, inflammation, sleep/wake cycles, thermoregulation, moods, pain responses, learning and memory, digestion/appetite responses, stress responses, osteogenesis, fertility, as well as neural development and plasticity. In particular, the endocannabinoid system can significantly reduce the stress of the excessive stimulus in the body commonly associated with immune disorders.

“Endocannabinoids and their receptors are found throughout the body; in the organs, connective tissues, glands and immune cells. In each tissue, the cannabinoid system performs different tasks, but the goal is always the same: homeostasis. (The maintenance of a stable internal environment, despite fluctuations in the external environment)”

Evidence suggests that the endocannabinoid system is intimately involved from conception. Endocannabinoids are at their highest levels in the human body at birth. Endocannabinoids are passed through the mother’s breast milk, and are associated with the suckle response in the infant, as well as bonding between the parent and child. (Fride, Ginzburg et. al 2001)

Neurogenesis into adulthood is impacted profoundly by the endocannabinoid system. It is essential to cell growth and differentiation within the human body, particularly in the proliferation of neural stem cells. (Park B, McPartland JM, Glass M. 2004)

“The ECS is an essential modulatory and protective system, which allows the human body to adapt to various internal and external stimuli”

There are two primary endocannabinoids which the body produces of its own accord. Anandamide, which means ‘bliss’ in the Sanskrit language, and 2-AG, short for 2-Arachidonoylglycerol.

“The ECS is a modulatory, inhibitory system (rather than a basic system). Its role is to modulate other neurotransmitter systems by inhibiting them. The ECS determines the activity of other systems, i.e. a highly active ECS reduces the activity of other systems, or vice versa. Depending on the nature of the inhibited global system, observed effects may differ. Therefore, depending on the disease and the physiological system involved, either inhibition or activation of the ECS may give beneficial results in patients”

It’s legitimate to wonder how cannabinoids can effect so many physiological systems, all under the unified function of ‘homeostasis’. So, how is it done?

Cannabinoids function in a ‘retrograde’ fashion. And I’m sorry, but no, this has nothing to do with Mercury. Cannabinoids have a multitude of physiological effects depending on the site of action, or the locality in which those receptors reside.

In short, the effects of cannabinoids can be sedative, or stimulatory, sourced internally or externally. In the end, it’s all about the neuronal site of action. 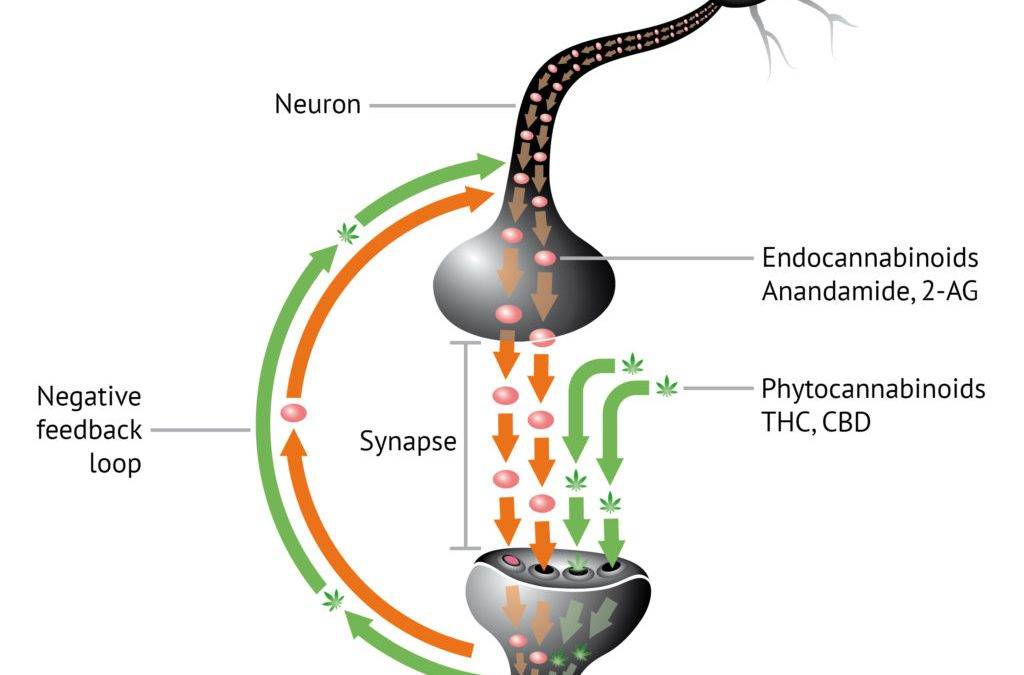 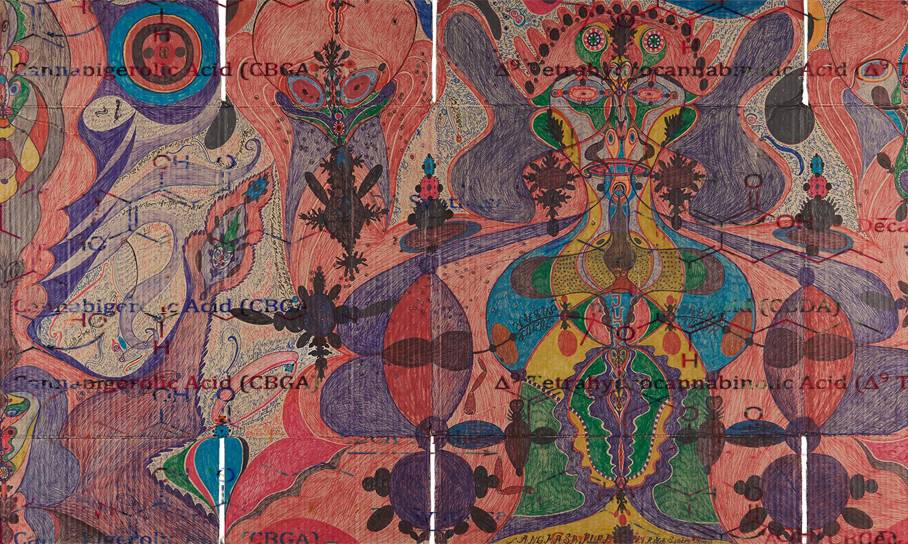 Of the cannabinoid receptors in the body, there are 7 Transmembrane G-Protein receptors. The two primary types, known as CB1R and CB2R, are essential for the harmonious functioning of the brain and body. Both CB1 and CB2 receptors act to inhibit upon the presynaptic terminal.

The CB1R is mainly central – in fact, it is the most widely expressed G-protein in the Brain. It’s up to ten times more numerous than in opiate receptors! It also exists in dense distributions within the Central Nervous System, and can exist peripherally throughout the body. When THC binds to CB1R, the well-known psychoactive effects of the compound are produced.

There are typically high concentrations of CB1R in the Cortex and Basal Ganglia, impacting dopamine and motor activity; as well as the Substantia Nigra, associated with dopamine production and movement disorders such as Parkinson’s; the Hypothalamus, which governs appetite, sedation and emotion; the Cerebellum, which impacts motor co-ordination and speech; the Hippocampus, which processes short term memory, the Cerebral Cortex, which governs higher brain function; the Amygdala, which impacts moods and can contribute to anxiety/depression; and, last but not least, the Spinal Cord.

CB1R is notably absent in the respiratory and autonomic centres of the brainstem. One of the impacts of this is that there is no possible cause of death via respiratory depression with ingesting cannabis, unlike opiates.

CB2 receptors, on the other hand, are mainly found peripherally. CB2 is associated with the modulation of immune function and inflammation. It’s expressed on literally all of our white blood cells, including C Cells, T Cells and Macrophages. CB2’s expression is ‘inducible’, meaning that receptor concentrations can be up-regulated in response to inflammation, hypoxia, and tissue or cell injury. It’s also expressed centrally within the ‘Glial Cells’, which have a role in the modulation of immune function, inflammation and neuro-protection.

The Endocannabinoid System and Autonomic Tone

CBR1 is expressed within the Sympathetic Nervous System. Here, its activation inhibits norepinephrine release and dampens sympathetically mediated pain. Additionally, it modulates the hypothalamic-locus coeruleus-norepinephrine axis, or HLN. CB1 is also located within the Parasympathetic Nervous System, which in turn decreases elevated activity and produces the anti-emetic effects of cannabis.

The cardiovascular system is another area of the body where the presence of CB1 is significant. Not only is CB1 activated within regions of the vascular tissue, but the presence of myocardial CB1 receptors can either increase or decrease the vagally mediated biphasic effects produced within the body.

Cannabinoids bring about profound modulations to the body and immune system. We have discovered this in part with thanks to how THC has been observed to up-regulate the endocannabinoid system and CB1R density, particularly in the case of acute or small doses. In these cases, endocannabinoid production is increased, along with their affinity to CB1R. This ultimately leads to enhanced pain relief imparted by the additional endocannabinoids within the system. This goes to show that small doses of THC can dramatically increase the effects of all cannabinoids. A little goes a long way, or so they say.

CBD is an ECS Modulator

There are multiple mechanisms of action by which CBD can modulate the endocannabinoid system of the human being. CBD has a low CBR binding affinity, and doesn’t bind directly into the cannabis receptors; but it does affect how other things bind. The presence of CBD increases endocannabinoid signalling. It suppresses the degradation of THC (FAAH), increases AEA in the synapses, and boosts the activation of CB1 receptors.

CBD also activates the S-HT1A receptors, which increases the binding of serotonin. It’s a TRPV-1 Agonist, which is associated with pain perception; it also stimulates 2-AG, and is a THC antagonist on CB1 receptors. Significantly, it acts as an antagonist against GPR55, which impacts blood pressure and bone density, and can be found throughout the brain and cerebellum. The overactivity of GPR55 can lead to osteoporosis, and its activation promotes the proliferation of cancer cells in the body. As CBD is an antagonist, it actively decreases cancer cell proliferation.

The endocannabinoid system has a significant role to play in regulating bone density. The technical language used in this case refers to Osteoblasts, which build up the bone, and Osteoclasts, which break down the bone. CB2R stimulation results in decreased Osteoclast activity and increased Osteoblast activity. Ergo, CB2 basically builds bones. The CB1 receptors are found in high density in the sympathetic nerve terminals located nearby osteoblasts.

The ECS and Other Substances

It may surprise you that the Endocannabinoid system is impacted by other drugs, too. Ibuprofen and Toradol, among other NSAIDS, have a mechanism of action which is dependent upon cannabinoids. Paracetamol (APAP) is similar in this way. Cannabinoids are what allow Steroids, or Glucocorticoids, to work properly. And Benzodiazepines receive their anxiolytic effect from CB1R.

The Dysregulation of the ECS

Maintenance and Support of the Endocannabinoid System

A few tips for keeping your endocannabinoid system nice and functional:

Microbial life is a world of its own. In fact, there are 10 times more microbes in the human body than there are cells. 70% of the immune system resides in the Gut Associated Lymphoid Tissue, or GALT. The anti-inflammatory and immune supporting function of probiotics enhances the ECS. Probiotics have been associated with improved cannabinoid signalling.

They can be found in kombucha, fermented foods, kefir, yoghurt, sauerkraut, kimchi, tempeh and miso.

As for other supplements and dietary options:

The endocannabinoid system is widely distributed throughout the entire body. By operating as a fine-tuning mechanism throughout the entire body, its ultimate function is homeostasis. The ECS is of significant complexity, but its regulation is subtle, compassionate and kind. Its agonistic/antagonistic effects are only ever partial, and not complete. With that being said, there exist rich potentials for the therapeutic manipulation of the human endocannabinoid system, in order to treat a wide spectrum of ailments.

​How (and Why) Your Brain Makes Its Own Cannabinoids

How Terpenes and Flavonoids Contribute to the Taste and Smell of...