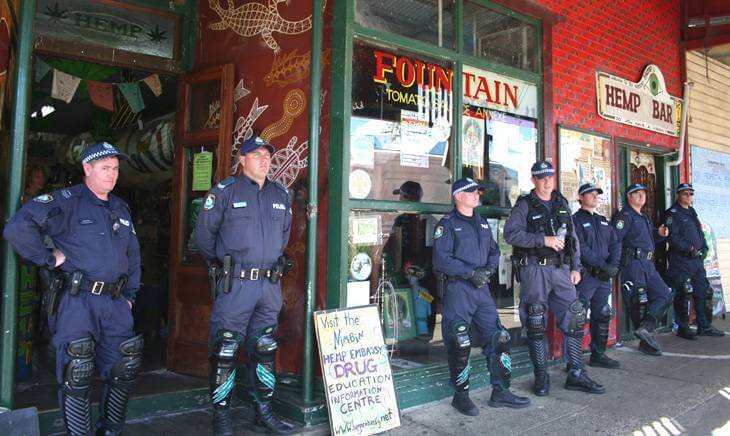 Notorious for hippies and high unemployment, the town of Nimbin in the hills of Lismore shire retains its pot-smoking pride well into the 21st Century. Following the heyday of the ‘Aquarius‘ hippies, the tiny village became the epicentre of Australian cannabis culture. Since 1993, Nimbin has been the home of the annual ‘Mardi Grass’ festival.

It’s hard to dispute that Nimbin is the cannabis capital of Australia… but in recent years, that title has been coming increasingly under threat. NSW Police have significantly expanded their presence in the town, cracking down on growers, vendors and regular cannabis users in the process. Will the spirit of Nimbin survive?

Nimbin is considered a hub for tourism and the centrepiece of Australia’s cannabis culture, but an increasing police presence and the introduction of some unsavoury characters has put a strain on the town. 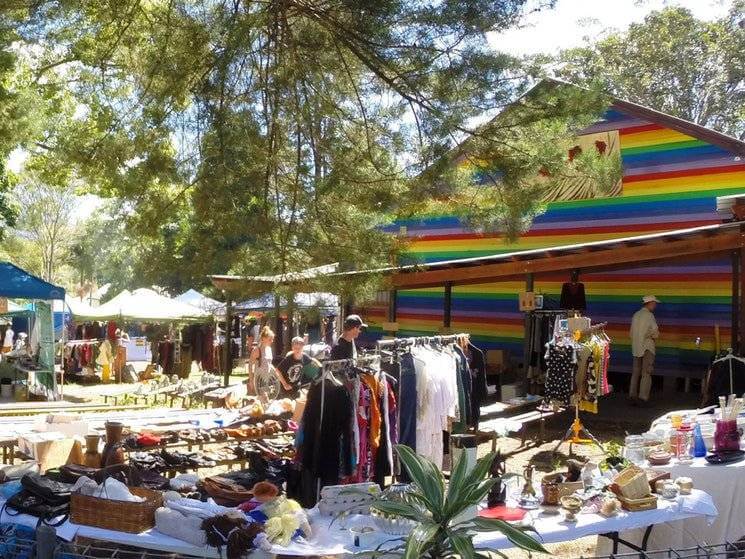 Just a day before the beginning of the 2019 Mardi Grass in May, The Hemp Embassy at Nimbin was swarmed with police. 7.5kg of cannabis leaf was seized, with an estimated street value of more than $90,000. Additionally, police seized more than 500 pre-rolled joints, a small amount of what was purportedly methamphetamine, and significant sums of cash.

Around 50 people were inside at the time. They were all evacuated, with 20 police and several dogs searching each person as they left. The operation was undertaken by ‘Strike Force Nerissa’ – a taskforce established by the Richmond Police District to investigate the illicit supply of cannabis in the Nimbin township. As inquiries continue, no arrests or charges have been made.

The Thursday before Mardi Grass marks one of the busiest days of 2019 for the embassy. It was at this time that police from Nimbin, Kyogle and Woodenbong descended on the Hemp Embassy with a warrant to search the premises. According to the Hemp Embassy website, Mardi Grass is a ‘celebration and rally to protest the drug laws, educate people on the various uses of cannabis (medicinal, industrial, recreational & spiritual) and to celebrate the culture that has grown here over the last 40 years’. The operation was a shock to the small town and its growing festival.

Police were out in force over the course of the festival, targeting ‘illegal drug activity’ and ‘anti-social behaviour’. 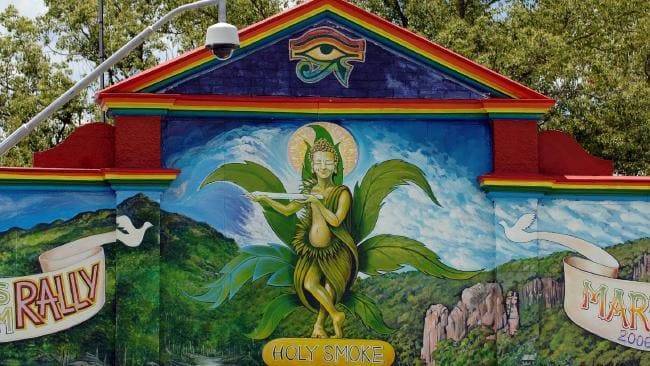 This isn’t the first time that the Nimbin community has been stung. Police have been expanding their presence within the region for some time now. In recent years, calls by politicians for ‘drug crackdowns’ have had disastrous impacts. In particular, a string of high-profile arrests in 2015 and 2016 halted a trade that saw Nimbin locals growing and selling kilograms of the plant every day. Seven people were arrested back in April of 2018, just a week before the MardiGrass of that year. In the lead up to 2019, police once again made their presence felt.

“When I came here, there was one cop in town,” explains Michael Balderstone, President of Nimbin’s Hemp Embassy. “Back in those days it was just cool, it was no big deal, and the smart police were happy to leave pot alone.”

Michael goes on to explain that as property prices around Byron soared, a demographic with more cash and less time for drugs moved in. With them came more police, who imported Sydney’s zero-tolerance drug policy to Nimbin. And then things came to a head in 2016.

These high-profile dealers came to be known as the ‘Lane Boys’. They were a collection of young men selling marijuana from at a well-known laneway in Nimbin town. The boys were engaged in a local operation that provided safe, fresh cannabis to the many tourists making the pilgrimage to the village. 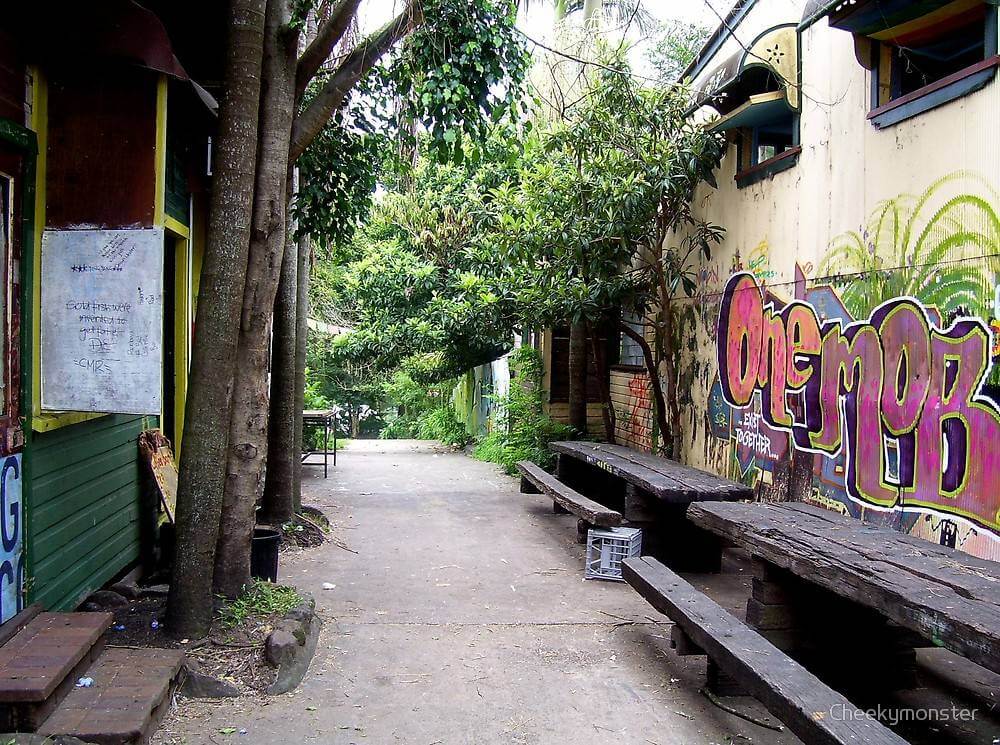 Then, all of a sudden, everything changed. In June 2016, More than 40 people were arrested during Strike Force Cuppa, which netted the police around a $1 million in drugs, cash, and guns, scoring 11 of the ‘Lane Boys’ a collection of jail terms and suspended sentences.

“I only ever dealt marijuana,” explains one ‘Lane Boy’ named Ruben. “It was very extremely normalised… it’s like you grow up out west and your dad’s a sheep shearer, and you’d probably end up shearing sheep.”

Ruben — Like Michael from the Hemp Embassy — believes that weed was (and is) part of the region’s cultural fabric. He says he got into dealing weed because it was socially acceptable, which meant his drug conviction came as something of a surprise.

Indeed, all of the boys’ drugs convictions were a first for Nimbin, and many felt that it was a case of the NSW Government making an example of the boys to draw a line in the sand. As Magistrate Alexander Mijovich said in court before sentencing: “Nimbin needs to grow up… [it’s not a] pocket of its own that’s not part of Australian law.”

In the year since, several people have been arrested in and around Nimbin during drug dog operations. With much of the old guard in jail or retired out of fear of legal consequences, there has been a notable increase in the concentration of methamphetamine in the township – and along with it, sketchy, out-of-town dealers who prey on tourists. 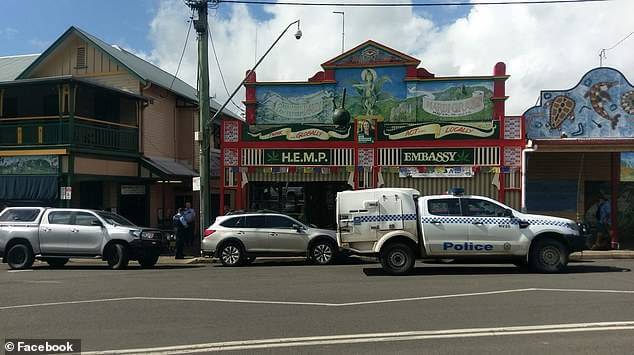 Locals gathered at the embassy on Thursday, as word spread about the raid. They protested in song. One man was seen wearing a hi-vis jumper and carrying a guitar. Others gathered with umbrellas decorated with cannabis leaves, singing a version of ‘we will rock you’ directed at the officers inside.

“[It] was the perfect reminder of why we hold MardiGrass… Maybe that’s why they did it?” Michael Balderstone suggested to the Byron Echo. 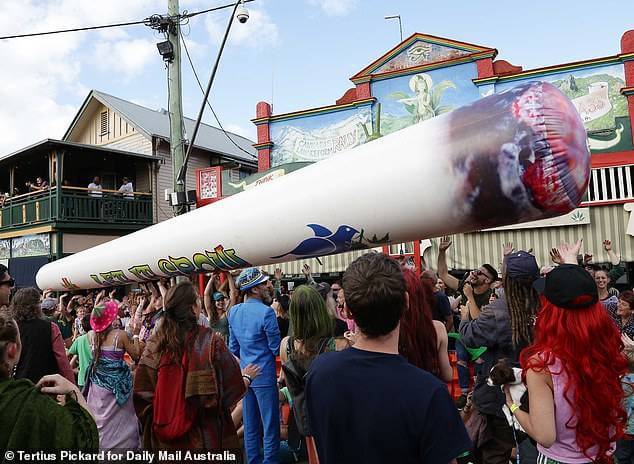 It’s obvious that MardiGrass will continue into the foreseeable future. However, many locals say they’ve already noticed a significant shift in the town’s atmosphere. Because as Ruben observes, “If a tourist came to town now, they’d probably be pretty disappointed.”

A woman identified only as Judy called the police operation ‘a huge waste of resources’.

‘The millions of dollars that goes into this stupid drug war could go to health, education and training… this is so stupid, so counterproductive,’ she said. ‘What’ve we got? We’ve got a police force that does anti-community policing. These guys have far better things to do.’

Looks like the police have nothing better to do than try to enforce a ridiculous and outdated law that the majority of Australians want rescinded. I wonder how many of those officer are secret tokers?

7.5 kg of leaf has a street value of $0 leaf goes in the bin or gets composted the stupid Fuckn idiots fuck police r stupid I’d like to see that get past the magistrate!! Infact what’s the best that the magistrate basically cracks the shits for waisting courts time why don’t stop waisting tax payers money and use it to raid cook houses

As a local nimbinite l have to say, the wars getting harder as big corp tried to take over. We need more numbers to stand up and be counted to help the cause of medicinal cannabis. I’m a paliative care nurse trying to help our elderers stay in our area to die.

Fucken cops, they’re all dickheads, they’re just doing it for the government because the government is afraid of losing the money going into their pockets from our taxes due to the medications we have to buy.