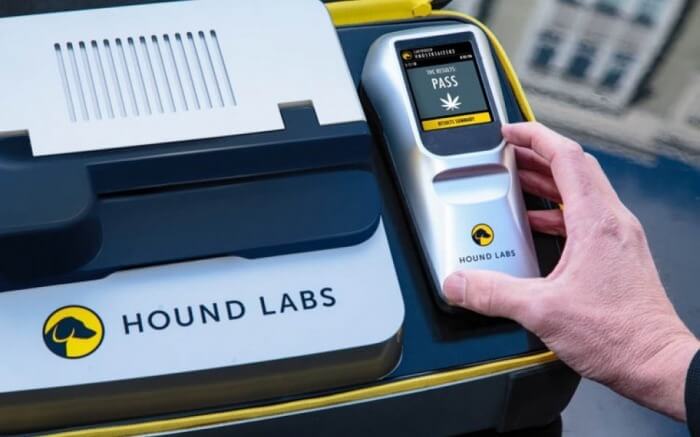 Recently, a Californian company claimed to invent the first marijuana breathalyser. The technology has been sought after by law enforcement services for years now. The device, known as ‘The Hound’, will allow police to determine whether drivers have actually ingested the drug.

As more states across the US legalise cannabis for recreational and medical use, there has been an increasing concern for individuals that drive stoned. In Colorado, where weed was most famously legalised, the number of drivers involved in fatal crashes that tested positive for marijuana has sharply risen since 2013, more than doubling in that time.

Until now, U.S. police officers had no roadside means to determine whether a driver had consumed cannabis. That is to say, they mostly depended on field sobriety tests, developed to catch alcohol use.

Hound Labs wants to change that. Their mission is to make testing for marijuana as easy as testing for alcohol.

“We are trying to make the establishment of impairment around marijuana rational and to balance fairness and safety,” CEO Mike Lynn told NPR.

Hound Labs claims that their disposable cartridges can detect marijuana use within the past two hours. The product will still have to run a tough gauntlet of medical and legal complexities. It’s also competing with other roadside measures, such as saliva and fluid tests.

“When you find THC in breath, you can be pretty darn sure that somebody smoked pot in the last couple of hours,” Lynn said. “And we don’t want to have people driving during that time period or, frankly, at a work site in a construction zone.”

Though many researchers and companies may dream of fielding a roadside test for driving under the influence of cannabis, such a product may still remain years away from practical service. What Hound Labs have said about their product goes against what many industry analysts have argued – that data sourced from these tests is highly imprecise. Both the breathalyser and other mouth swabs rely on detecting levels of THC in the blood. Unlike alcohol, however, THC metabolites remain detectable in the bloodstream for days or weeks.

With this in mind, the data demonstrating the sharp rise in car crashes involving weed use in Colorado begins to take on another meaning, for it really only shows that more people have been smoking weed and jumping into cars without weeks or months in between usage. It does not necessarily indicate that cannabis impairment is causing all of these crashes.

THC has a vastly different action in the body than ethanol, the active ingredient in alcohol. Ethanol is unique in that its pharmacokinetics are rather linear—it is a nervous system depressant, and the more you drink, the drunker you get. This has led to the widely accepted limit of about 0.08 BAC for driving. By contrast, THC is a nervous system modulator. It mimics the endogenous neurotransmitter anandamide, altering nerve cell signalling in ways for which experienced users compensate.

Marshall Doney, head of the American Automobile Association, had this to say in a 2016 analysis of the problem: “There is understandably a strong desire by both lawmakers and the public to create legal limits for marijuana impairment, in the same manner as we do with alcohol … In the case of marijuana, this approach is flawed and not supported by scientific research … It’s simply not possible today to determine whether a driver is impaired based solely on the amount of the drug in their body.”

One of the spanners in the works is the tolerance that regular users develop towards THC. Just 10 milligrams would have significant effects on an inexperienced user, where experienced users would have to consume more to gain a similar effect.

As far as finding a test that works, the science is just not there. Turns out, correlating the presence of THC with actual impairment isn’t that simple. If such tests wish to ever move beyond the hurdle of falsely indicating positive readings long after the time of ‘impairment’, millions of dollars’ worth of speculative research will be required for the task, along with human trials. Further, extensive community input on drug policy is needed, such that our concerns be reflected by law enforcement and the state.