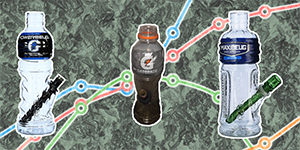 The Rise and Fall (and Rise Again) of the ‘Gatorade Beug’

Let me harken you back to a historical moment in time, not so long ago… when you really could walk into any stretch of suburban Aussie bushland – most commonly, on the verges alongside train stations, beside walking trails, and between camp dormitories – and amongst the assorted litter, stumble across a handful of plastic Gatorade bottles and cut-off lengths of hose; their insides singed with the scraps of cones, laid waste by those who came before.

The dumping of these artefacts is clearly a deeply irresponsible act – that almost goes without saying. In another way, though, our consumerist and prohibitive culture made the compounding garbage an inescapable reality. For decades, picking blackened plastic off the grass has just been a part of ‘smoking up’.

In recent years, a tide of environmental awareness has swept the cannabis scene. Even today, as less stoners leave their rubbish for others to collect… waste disposal of ‘recycled’ bottles remains a huge problem among recreational stoners, all across the world. Redditors may remember 2018’s ‘stoner cleanup initiative’; a worldwide awareness campaign and cleanup effort geared towards shifting this insidious aspect of the cannabis culture.

Australia certainly isn’t unique in its litter problem… but it has always been a bit ‘different’… by and large, we took pride in the plastic bottle, which has only exacerbated our litter woes.

600ml Gatorade bottles specifically became a signifier of the cannabis culture in Australia. This is undeniable. Successive generations of high-schoolers were trained in ‘Stoner Engineering 101’, adopting the revered construction methods of their forefathers. Dutifully, the older generations have been passing down the ancient wisdom to younger folks – and today, this DIY attitude remains alive, in the Aussie stoner’s ability to fashion all different kinds of objects into smoking implements.

Adventurous bud smokers have flirted with Powerade, Pepsi, and even Masterfoods sauce bottles; yet almost always returned to the form and factor of the ‘Gatey’. The distinctive qualities of the bottle gave it a real edge over the competition. It was hailed by Australians far and wide as the undisputed king of the pack – especially after Lipton changed their Ice Tea bottle design…

As is usually the case with niche cultural traditions, there isn’t much easily accessible information available to pin down the origin of the ‘plastic bottle bong’ phenomenon — or the ‘Gatey’, specifically.

We know that glass bongs came into their own in the hippie era, thanks to pioneers like Bob Snodgrass. This was followed closely by the first PET plastic soda bottles in the ’70s — Coke made the switch in 1978.

It was only natural that the DIY bottle bongs came shortly after. With only a lighter, a length of hose and some foil, resourceful stoners were able to smoke through water easier (and cheaper) than ever before. Anecdotal evidence suggests that Aussies were onboard by the late ’90s… by which point, plastic bottles were available for most popular brands — including Gatorade.

The ‘Gato’ design changed regularly during the early 2000’s (see below)… yet, its signature extra-thick plastic kept people coming back.

That is… until people didn’t.

So… Where Did All The Gatey’s Go?

Plastic bottle bongs of all kinds are a much rarer sight in 2020. Sure, they’re still to be found, but they aren’t nearly on the scale they once were.

So… where do we lay the blame for Gatorade’s fall from grace? There are a handful of theories about what led to a broader shift away from good ol’ plastic ‘Gato’s’.

Common anecdotes about Gatorade thinning down their plastic with recent bottle redesigns have made the rounds. It’s not unusual to hear from certain fellows that it just isn’t the same; that the bottles “just don’t melt” as they once did.

When I emailed Gatorade, they responded by claiming that the change was “purely aesthetic,” and that the “plastic weight hasn’t changed.”

So, if we can’t blame the bongs… it’s gotta be the ones smoking them!

Smoking From Plastics Is Hazardous

Can anyone really be maligned for leaving plastic bottle-bongs behind?

The Australian public have woken up to themselves. It’s been pretty widely documented that smoking from plastic is a pretty bad idea. The hardline bong-smoking purists are making a point of evangelising glass over plastic.

Additionally, bongs have gone out of fashion; vapes have exploded in popularity in the last few years. Many stoners are shifting away from combustion altogether.

It feels like the tide has turned against the kind of one-and-done, DIY aesthetic that Aussie stoners have historically favoured.

A Dying Breed of Cultural Cornerstone

Irrespective of whether we view the Gatey as an old friend, or a lung-tearing travesty, we should be able to agree that casually discarding them into natural systems was always a bad idea. Dirtbag stoner-ism is becoming less common, and we should celebrate that.

Still, it’s tough not to wonder if something has been lost with its broader disappearance from coffee tables. A lot of us have fond memories of constructing our first Gatey. It was a rich experience; to master the art of the stem hole, then determine the optimal shotty position (psst – it’s opposite the stem).

Sentimentality aside, there isn’t much of a case to be made for the Gatey in the Year Of Our Lord 2020. In addition to the health risks that plastic poses, Australia’s recycling system is barely functional, and glass pieces are cheaper (and better) than ever. If you’re still stuck on plastic, consider doing yourself and the environment a solid – and pick up a glassie of your own!

Still want the old touch of the ‘Gatey’? Well, look no further… 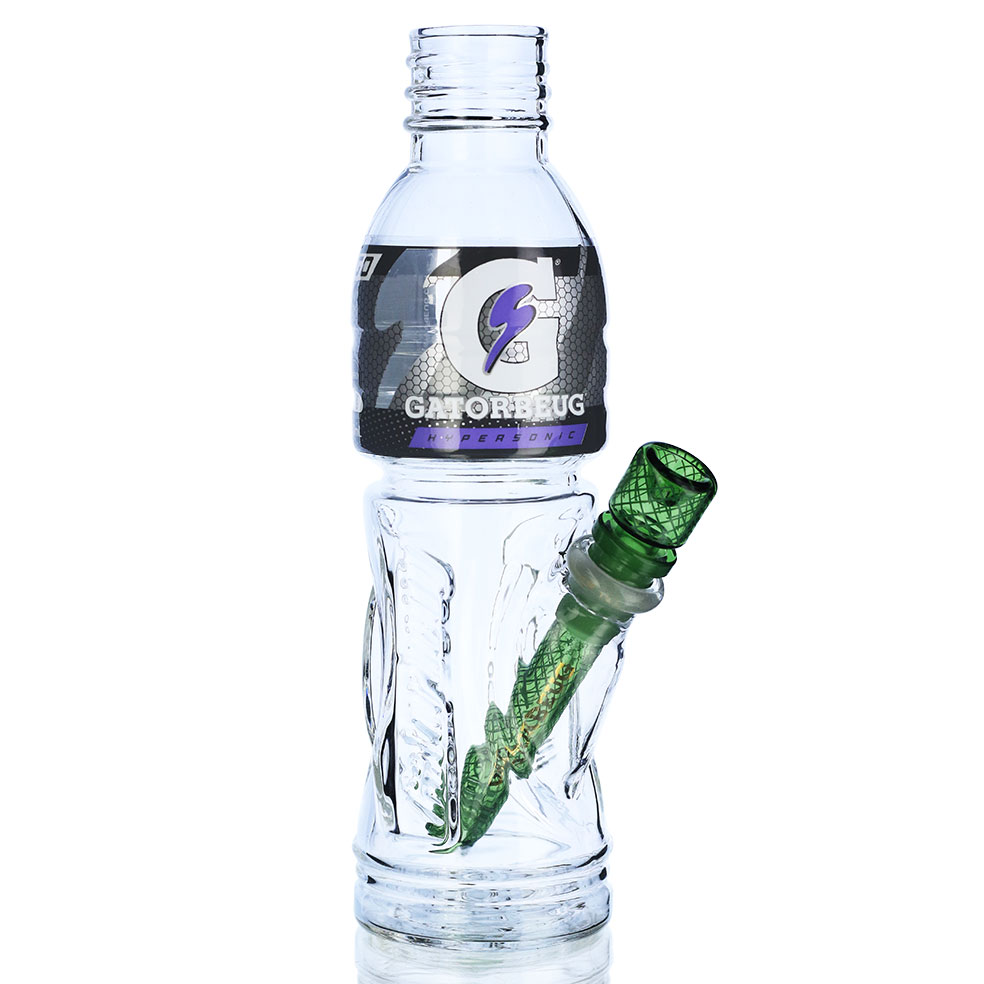 The forces aligned against the humble ‘Gatey’ are immense. Yet, there remains a committed community of loyal Aussie supporters… and they’ve got a solution to the old problems of the Gatorade Beug.

A handful of enterprising stoners in Sydney launched ‘Gatorbeug‘ in 2016 – a company dedicated to designing and distributing custom glass ‘Gatey’s’. The FAB crew rates this product, and sees a lot of potential in the idea of a glass ‘Gatey’. We’re excited to see that the company has updated their product line to include imitation sauce bottles, Iced Coffee’s, Vegemite containers; and more!

…Even if a $120 glass ‘Gatey’ isn’t on the cards, there are a plethora of other options out there besides chopping up plastic bottles. Amazon and eBay alone are stocked with billies of all shapes, sizes, and prices. It’s a buyers market.

So, take your pick. The ‘Gatey’ is still there to be constructed, if you’re keen enough… but there are plenty of healthier choices if you just aren’t. Only time will tell if desperate high-schoolers and sentimental stoners can keep the legend alive.

From plastic to glass I’ve made the journey on DIY and the plastic gatey comes up short in airflow because the structure collapses regardless of holding the shotty or not. Gatorbeug however held it’s form and the airflow was clean from start to finish. Glass makes a world of difference and there is something to the shape of a gatorade bottle. Thumbs up from me for bongheads interested in the gatorbeug it’s a great recommendation.

Orchy (orange juice) bottles were the go to well before gatorade. And powerade bottles used to be better than gatorade. The front index finger shotty was good too as you wouldn’t spill the water if you tipped it back to far.

The Top 8 Vaporisers to Convert Even the Biggest Bong Head!

Getting On: AU vs EU