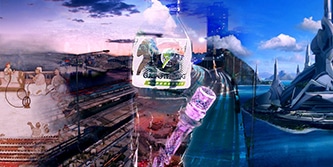 The History of Bongs | Past, Present and Future

How did you smoke your first cone?

Was it through one of those brass dollar-store pipes? Or, a plastic gatorade bottle? Perhaps, you’re a cultured fellow; perhaps you crushed it through a deformed Red Bull can, with holes poking out of the centre…

If you were lucky, your first experience was through a pristine glass bong. For most any water-pipe smoker, this is the ideal; the pleasure of that first silky-smooth rip can be a defining moment that sets one on the path towards becoming a full-blown stoner.

Most of us have been there. Good glass bongs in our teenage years were a common point of reference for each and every member of the FAB crew; and these days, we’re all passionate cannabis smokers. A high-quality piece truly does make all the difference.

But – who do we have to thank for this technological marvel of the glass piece? Surely, if we trace back into the annals of history far enough, the proto-bong is somewhere to be found…

A Rip In Time

Turns out, the act of ‘tracing back’ the history of the bong has not been made that easy by our ancestors. Unsurprisingly, these kinds of things aren’t well documented.

It’s plausible that bongs are a lot older than we suppose. The earliest biodegradable billies would all be long gone by the time modern researchers began their search. Archaeologists have found bits of stone shaped like modern cone-pieces, in their digs; but that isn’t a guarantee that they were part of ancient bongs. Even with carbon-dated evidence of cannabis being buried with the dead… we can’t know exactly how the plant was used.

There are some articles which list 2400-year-old Scythian artefacts as the earliest bongs. In 2015, a set of large, solid gold dishes were discovered in Russia, with a residue coating – containing both opium and cannabis. Unfortunately, despite some of the over-eager reporting on the discovery, it doesn’t seem likely that these dishes were actually used as bongs, or smoking receptacles.

“Because the sticky residue was found on the inside of the vessels, Belinski and Gass think they were used to brew and drink a strong opium concoction… while cannabis was burning nearby.”

They’re more like teapots than bongs, it would seem.

A stronger case can be made for the ancient stone pipes found by archaeologist Joanne Dombrowski, in an Ethiopian cave. A 2016 review of the pieces makes it clear: they were almost certainly bongs:

“Both bowls formed part of waterpipes; an aperture at the bottom of the bowl allows for the attachment of a vertical stem, which presumably descended into a water container.”

Which is all good to know… but what about the first mass-manufactured bong-like smoking vessel? Can we find a design that has continuity with the modern glass pieces sold today?

Mercifully, that line is a little easier to locate.

Sometime in the late 16th century, Chinese smokers began using Persian-style hookahs. Accounts suggest these hookahs were similar to designs observed up to this day; with a water-filled bowl kept on the floor, attaching to a long flexible hose to smoke through.

By the 17th century, people had arrived at the so-called ‘Chinese water pipe’. These vessels were significantly smaller and more portable than hookahs. These water pipes quickly became popular among both the peasants and the nobility.

The influence of water pipes cannot be understated; they were a massive inspiration for the modern design of the bong. Even today, the basic principle remains – using suction, let the smoke filter through the water, reaching your lungs.

Smokers packed and lit a small bowl, drawing smoke through a reservoir of water in the base, and into a long, thin mouthpiece. Peasants improvised the design using bamboo or wood; richer merchants and aristocrats used metal versions, many of which survive today.

There was plenty of room for improvement on the initial water pipe innovation. Not many stoners are using metal these days; they’re still around, though…

Most modern bongs use borosilicate glass, because it’s more than well-equipped to survive the repeated heating-and-cooling that bongs are subjected to.

Bob Snodgrass is widely credited with popularising these glass pieces in the ’60s and ’70s, as a travelling glassmaker. He invented the ‘fuming’ technique, which is used to infuse psychedelic designs into glass. He spread his innovation by making and selling pieces in the parking lot outside Grateful Dead concerts. 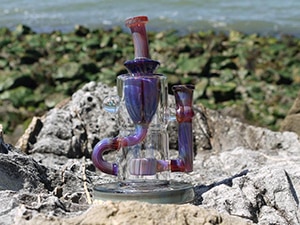 Despite a few legislative hurdles, bongs have sold like hotcakes all around the world since the hippie daze of the 1960’s. Pyrex has taken its place alongside borosilicate. DIY pieces have been constructed from almost any household item; double bubblers and ice chambers are available at most head shops.

At the cutting edge, innovation continues. Studenglass has made waves for its adaptation of the infamous gravity bong formula. This beast draws ungodly quantities of smoke with a 180° turn. Here’s Seth Rogan trying it out:

You don’t necessarily need to use herb/flower, either. Dab rigs use advanced designs and high temperatures to get the most out of some of the world’s strongest concentrates.

Hey, there! It’s Mitch the Editor, here, to close this one off…

While we’re talking about the potential future of bongs, let’s take a look at something that could well be from way back in the past.

I had this beauty custom made by an indigenous friend of mine – he calls it the ‘Didgeridun’.

Have a single cone, and you truly are done. It’s surprising to me that these things aren’t already Aussie icons.

This thing is the future, to me. It is literally a hollowed out branch. It signifies the return to natural systems; to organicism, to indigenous wisdom and connection to spiritual truths. It’s also watertight, but works perfectly well without any water – and is intended as more of a dry pipe.

The amazing part about this piece is the wooden taste, reminiscent of the Eucalyptus Gum the bong is made out of! Old mate told me that the elements were different in this piece.

I’ve honestly never smoked out of anything like it. I can’t rate it enough; it’s one of the best purchases I’ve ever made. The piece is surprisingly easy on the lungs. The lack of water actually translates to a hit that isn’t so heavy and overwhelming – it sits more on the energising and vitalising end of the spectrum!

Moving into the new decade, custom, handmade pieces (like this one) are more common. Turns out, supporting talented locals and their craft with your money is a great way of contributing to the broader community.

The Future of Bongs?

Bongs have come a long way – and people are still coming up with totally wacky sh*t. In the comments: let us know what you’d like to see in billies of the future. Check out our other articles for more high-quality Aussie cannabis content! 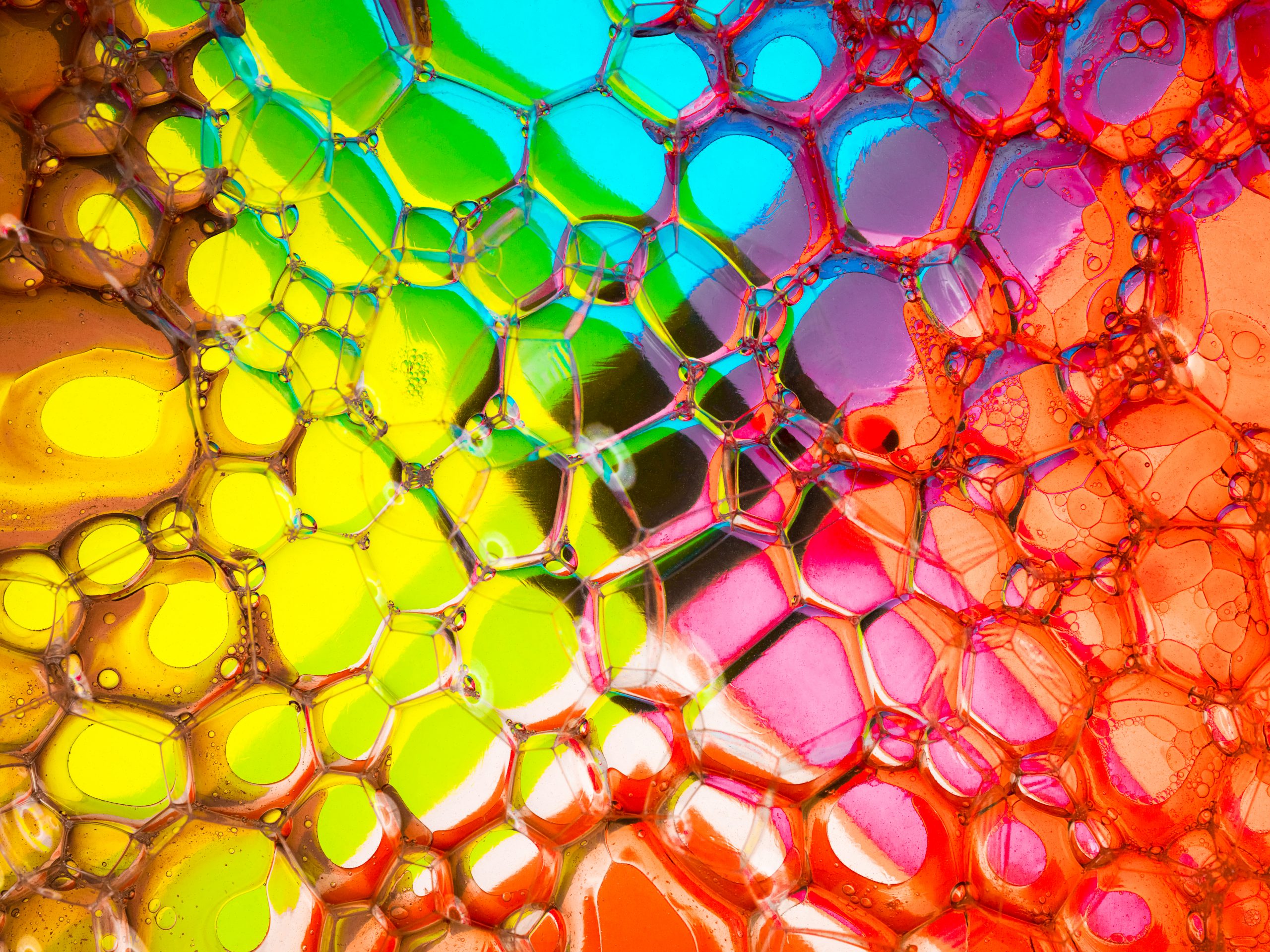 I’d like to see more innovations like the Digeridun. A more natural approach to enjoying the process itself is a healthy way to enjoy life.

Thanks for sharing such beautiful information with us. I hope you will share some more new articles. I am very greatful!

MatchBoxBros online smoke shop is your trusted destination for premium smoking brands at the best prices.

A Glossary of Australian Cannabis Terminology